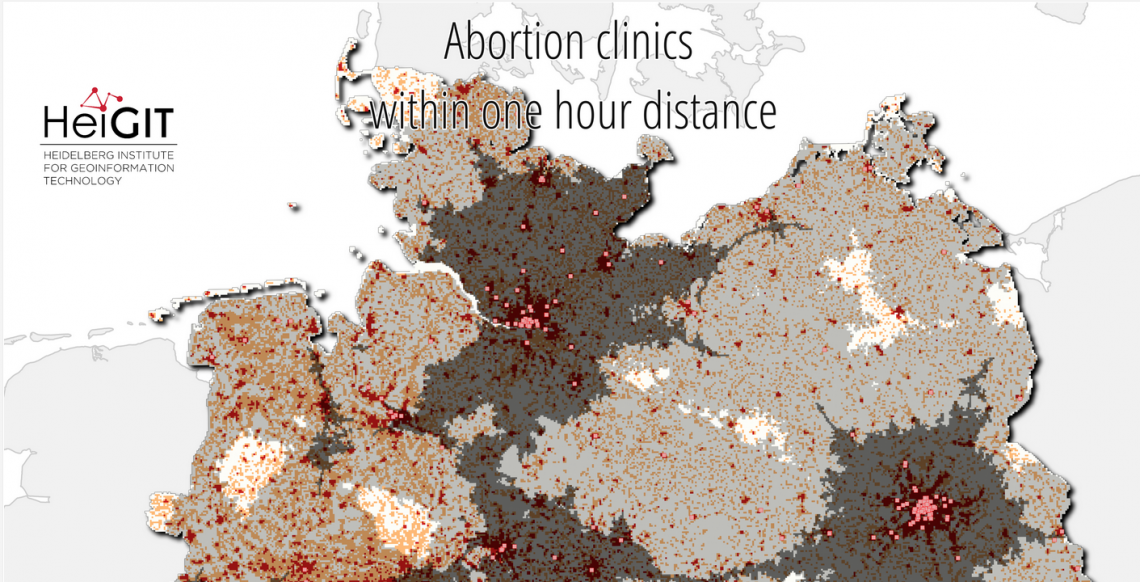 UPDATE 09.11.2022: Our team took part in the newly in-person State of the Map 2022 conference in Florence. We attended workshops, talks, and had the opportunity to present our own poster about the accessibility of abortion clinics in Germany, which will be discussed in this post and can be found here.

In the following blog, we’ll explore more information and maps on the topic beyond the poster’s content.

Inspired by maps of the New York Times¹ and the Katapult Magazine² about the overturned verdict Roe v. Wade in the Supreme Court of the USA and the repeal of §219a of the German criminal code, we performed an analysis of the accessibility of abortion services in Germany.

Paragraph §219a prohibits physicians from informing and “advertising” about abortion. Doctors are now allowed to provide information on their websites about whether they perform abortions and what methods they use. Previously, doctors themselves had to ensure that they were on the German Medical Association’s list of the doctors willing to perform abortions. Using data from list we were able to perform this accessibility analysis. Easy and quick access to this information is of enormous importance to the women concerned because, the earlier the abortion is performed, the less invasive it must be¹².

Background on abortion in Germany

Abortions are not a rare medical intervention in Germany. As reported by the Federal Statistical Office, a total of 94,596 abortions were registered in 2021. In the first quarter of 2022, 4.8% more abortions were performed than in the first quarter of the previous year. In 2021, the total number of abortions was even 5.4% lower than in 2020. However, abortion is still actually illegal⁴, with the criminal law on abortion codified in Section 218 has existed since 1871. Since 1972 (DDR) and 1976 (BRD), abortion is allowed until the twelfth week of pregnancy⁷. The paragraph further imposes mandatory consultation with a recognized counseling center and a three-day reflection period. After the 12-week period, abortions are allowed only in exceptional cases such as “[…] to avert a danger to life or the danger of a serious impairment of the physical or mental state of health of the pregnant woman […]”⁹

Abortion laws in the EU are not uniform. Almost all countries allow abortion but have different regulations regarding the period limit. In the Netherlands, abortion is legally possible up to the 24th week. Every 3rd to 4th woman living in Germany who has an abortion after the first 12 weeks decides to have an abortion in the Netherlands. However, this figure is collected from the reports of doctors rather than an empirical study. The research on so-called “abortion journeys” within the EU is still in its infancy and is funded by the European Research Council¹⁰.

Usually, abortion can be performed either by medical or surgical intervention. Surgical abortion (aspiration method) is the most common and mildest variant, which is performed under local or general anesthesia. It should be noted that the patient is not allowed to drive a car afterwards and is therefore dependent on other people or public transport. Since not all people have a supportive environment or do not want others to know about the procedure, public transportation plays a particularly important role in this context. In the case of medical intervention, the pregnancy is terminated by taking the hormone mifepristone. For this method, three visits to the doctor or clinic are necessary¹¹. Due to possible serious side effects, longer journeys can be particularly stressful for the patient so extended travels represent an additional burden. After the third month of pregnancy, the aspiration method is performed in Germany only in isolated cases. Rather, a birth is induced by means of labor pills¹⁰.

In addition, the number of doctors is declining. For example, in 2020, 39 physicians in Munich had permission to perform abortions. Half of them were over 60 and a few even over 70. In the last 10 years (as of 2020), 20 physicians are no longer available to perform abortions, whereas only six new applications for a permit have been submitted⁶. One gynecologist attributes the lack of successors to prices that are too low for too high a risk. ⁶

According to this trend, it can be expected that access to abortion services will worsen. Either because of decreasing supply density or increasing treatment costs, which may already be a problem for some of the affected women.⁶

To create our map, we downloaded a list of all clinics and physicians that perform abortions in Germany and are registered with the German Medical Association³. Before §219a was repealed, a central list by the association was created in 2019 to improve the access to information about abortion, which is updated on a monthly basis. Registration for the list is voluntary. As of June 2022, a total of 369 locations are available. For each location, we calculated isochrones with varying travel time intervals using the openrouteservice. A single isochrone depicts the area accessible from a location within a certain time threshold. We assume a best-case scenario with a car driving routing profile. The isochrones were combined with a 1km grid from the 2011 census bearing population and demographic information for each cell. This allows us to estimate the ratio of women and doctors or clinics that can potentially be reached in a time interval for every square kilometer in Germany. Based on additional information for each clinic or physicist, we have created two more such maps: one that considers only those locations that indicates the ability to speak a foreign language and another one that includes only locations that perform surgical abortions. Surgical abortions can be the only option for procedures conducted later in the pregnancy, often past the 9-week mark.

Most metropolitan areas have a high density of access to abortion services. Figure 1-3 all use the same symbology to visualize the combination of both the distribution of women and the distribution of doctors within a 1-hour car driving distance. Figure 2 and 3, however, use filtered clinic locations. The brighter the map unit, the fewer doctors available. The darker the red, the more women inhabit the area. The bivariate map shows poor coverage in large areas in the north and east of Bavaria. In general, the south stands out with the largest gaps in coverage. Densely-populated areas such as Nuremberg, Freiburg and the Lake Constance region are each covered by a single clinic only. Still, the coverage looks worse when we consider Figures 2 and 3 with the filtered clinics. For access to clinics that indicate the ability to speak at least one foreign language, coverage in rural areas is very thin to non-existent. Areas between Berlin and Hamburg and all of Bavaria except for Munich are not covered. Only access coverage for clinics that perform the surgical method is poorer. Filtered for this property, only four clinics remain in the entire South.

It is important to note that in this analysis, we refer only to those 368 clinics and physicians registered with the federal medical association. It is possible that other physicians perform abortions without advertising them before §219a was abolished. The completeness of the clinics’ characteristics regarding foreign language skills and abortion methods are subject to uncertainty. In our analysis, we only looked at those clinics that clearly provided information on one of these characteristics, while many clinics did not provide such information and were omitted from the analysis. Additionally, our accessibility model assumes a car routing profile, which certainly does not reflect the average patient of an abortion clinic. Therefore, the analysis at hand investigates a best-case scenario for reaching a location for safe abortions. Other important dimensions of access, such as social or financial, were not considered.