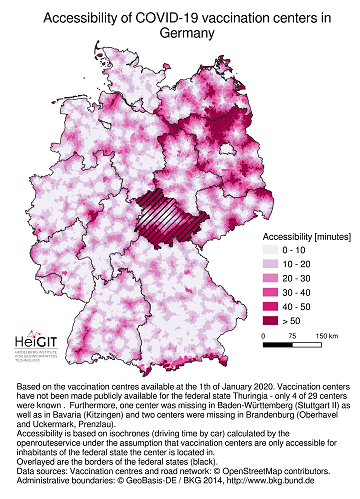 Most federal states in Germany have announced the location of the vaccination centers with the exception of the Free State of Thuringia which decided to keep locations confidential. The OpenStreetMap community has immediately added this information to its data base – details can be found in the corresponding OSM Wiki page. In addition to 25 vaccination centers in Thuringia, one center was missing in Baden-Württemberg (Stuttgart II) as well as in Bavaria (Kitzingen) and two centers were missing in Brandenburg (Oberhavel and Uckermark, Prenzlau).

We at HeiGIT have used this information to calculate the accessibility to these centers by means of the openrouteservice. Based on its isochrones functionality we calculated the time required to reach the centers by cars. We distinguished two cases:

According to news reports the second option is more likely.
In practice access might be further regulated in so far as that vaccination centers might be responsible for one or several districts (German Stadt- und Landkreise). Since details were not known the restrained to investigate this scenario further.
In a later step isochrones were intersected with the 1sqkm population grid based on the latest zensus in 2011.

The map shows the driving distance to the next vaccination center. State boundaries were considered as barriers for this analysis. The Free State of Thuringia has decided to not make the locations available – therefore the accessibility in this federal state is inaccurate and should not be used.

If we look at the individual federal states separately we see an uneven distribution of driving time: especially inhabitants of Brandenburg will have to undertake relatively long journeys to the next vaccination center in the federal state since 54.3% of the inhabitants are living in a driving distance of more than half an hour, from which 15.7% are living farther away than 50 minutes. Inhabitants of Mecklenburg-West Pomerania presumably will also have to face longer average driving distances.

If vaccination centers could also serve inhabitants of other federal states driving distances especially in Brandenburg and Mecklenburg-West Pomerania would improve (results not shown).

Some of our earlier work on healthcare / accessiblity using OSM: