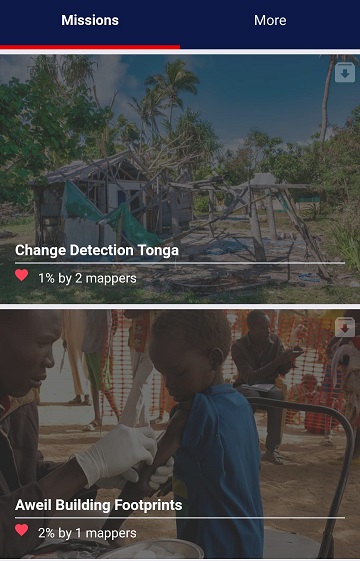 In 2015, MapSwipe began as a solution to a complex question: how do we better identify where communities and populations are, allowing mapping to be more efficient and effective?

Using a simple mobile app, volunteers are able to swipe through a series of satellite images, tapping in areas where they find features. MapSwipe can be used anywhere, at any time, which provides an easy access point for individuals to contribute to the Missing Maps project without being restricted to their laptop.

Two new project types have been introduced on MapSwipe, transforming the way that volunteers can contribute to humanitarian response globally with just a few simple taps on their phone.

Our team of volunteers contributing to MapSwipe have been working to redesign the user experience, ensuring that the mobile app functions on any mobile device in any geography. The new in-app tutorials coach MapSwipe volunteers on how to successfully and accurately contribute to projects.

To date, over 29,000 volunteers have covered an area totaling more than 600,000 sq. km. (that’s larger than the entire country of France!) using MapSwipe.

And we are just getting started.

If you want to learn more about MapSwipe, are interested in submitting a project, or want to get involved on the team that develops and maintains the app, visit www.mapswipe.org for more information and to download the app.

Check also http://mapswipe.heigit.org/ for MapSwipe Analytics tools developed by HeiGIT. Future versions of MapSwipe shall combine further methods from machine learning based on our research.