At long last, welcome to another addition of our How to become ohsome-series!
This one is special because we’re discussing a third-party application that uses ohsome API as back-end to accumulate historical OSM data. Although this innovation isn’t directly about our API, it’s close enough (and exciting enough) to merit inclusion and just one more opportunity for you to become ohsome yourself!

We’re talking about is-osm-uptodate which is, as the name suggests, all about checking if the OpenStreetMap data within your given input boundary is up to date. As this would be our first constant external user, we naturally just had to write a little shoutout blog post. The ohsome-team is more than happy to see that our product helps the OSM community gather needed data.
Is-osm-uptodate has been using ohsome API since the release of version 1.6 (v1.6 – Ohsome) on July 7th, 2021, emphasizing that the new API allowed the application to run “much faster” and “analyze wider areas”.

We decided to reach out to Francesco Frassinelli (nickname: FraFra), the main thinker behind is-osm-uptodate, to gain some insight into the application’s developers and its reach. In his thesis, Frassinelli compared ohsome API to other solutions which enable you to gather OSM historical data. He concluded that ohsome API was the “fastest publicly available API to extract the historical data” which was needed.  His thesis on the usage of OSM historical data was what lead to the development of the Is-osm-uptodate software. According to Frassinelli, between 50-100 unique users were active between June and July 2022.

Now onto to the application itself: Is-osm-uptodate is intuitive and easy to navigate. Users simply enter their parameters of choice using the same logic and selectors as when creating the usual ohsome request. Then, choose a boundary-geojson and the results are good to go, easily downloadable as either a geojson or json depending on how users would like to keep working with their output data.  Additionally, the application delivers rapid output, with requests fulfilled at a comparable time to ohsome. The output in the example below, which displays the first edits in all highways within the boundary of Neuenheim in Heidelberg, took only ~6 seconds to be generated. Furthermore, there appears to be no notable resource usage in the ohsome API cluster when sending a request with roughly the same scope as in our example. So additional requests via is-osm-uptodate are a “piece of cake” to the ohsome API. 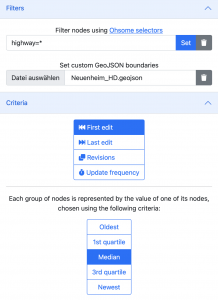 In the figures above, the input filter conditions and boundary (left) as well as the resulting map and output statistics (right) are shown.

Definitely give Is-osm-uptodate a look- it’s truly ohsome (and awesome ;D)! The excitement doesn’t end there though, with the next addition to this series offering a tutorial for the ohsome dashboard with special focus on our shiny, new advanced settings option!