Since the release of the ohsome quality analyst (short OQT) in February of last year, we have been working on developing an accessible yet powerful toolkit which provides end users insights on the quality of OpenStreetMap (OSM) data. An overview of the functionality additions made to OQT over this period of time can be found in the changelog. However, for this blog post, we wish to introduce one of the new major additions to OQT from release 0.10.0, the new Building Completeness Indicator. Before diving in on how to use the new indicator in practice, the underlying principles on how the indicator has been constructed will be discussed, as to facilitate an understanding behind the working of the Building Completeness Indicator.

The core functionality of the Building Completeness Indicator is to use proxy variables to predict an expected building area in a given area of interest (AOI) and to compare this prediction to the current building area mapped in OSM. The prediction is based upon a number of covariates which include; population and population density, settlement typologies, (both based on the Global Human Settlement Layer: GHSL GHS-POP R2019A, GHSL SMOD R2019A), the subnational Human Development Index and nighttime lighting as a degree of urbanity (EGO – Nighttime Lights VNL V2).

The indicator relies on a Random Forest Regressor and the prediction is performed on a hexagon grid basis. As such, your AOI is split into several smaller grid cells. The overall completeness is derived as the weighted average of all the hex-cells, where the weights are defined by the predicted building area. For release 0.10.0, the new indicator only provides reliable results within Africa, as the building data set (Open Buildings by Google) used to train the Random Forest regressor is limited to Africa. However, in future releases we plan to extend our coverage by using multiple open data sets such as the ones provided by Microsoft.

Building Completeness Indicator – In Use 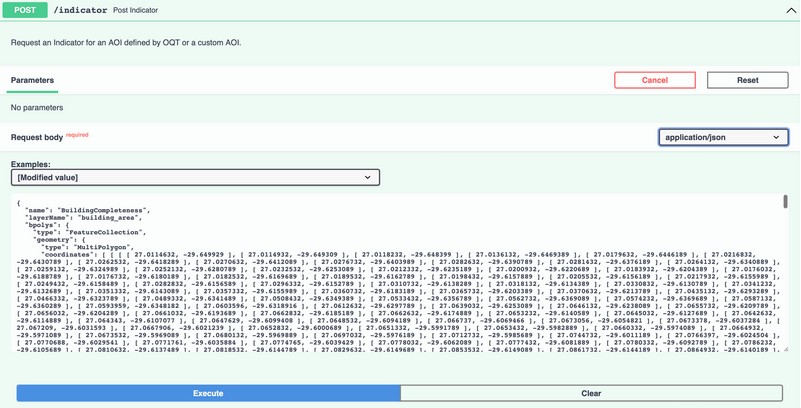 It is possible to access the Building Completeness Indicator in either the web application or Command Line Interface. Using the web application, it is possible to call the indicator by defining building_area as layer.name in an API POST request (/indicator) with a custom AOI within Africa (in this case Lesotho). When wanting to obtain a visual report it is possible to request an SVG (“includeSvg”: true) and, since release 0.9.0 it is also possible to request a HTLM snippet (“includeHtml”: true). When having executed the API request, the response should look similar to the figure below. 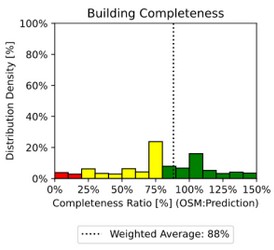 For the bounding box of Lesotho, we observe a variability in building densities which is relevant for the weighted average given due to how the prediction is executed, namely per hex-cell. If hex-cells which show low building count with a low total building area mapped in OSM compared to the predicted building area, then they should weigh in less heavily as hex-cells with a low completeness ratio and a larger number of buildings. 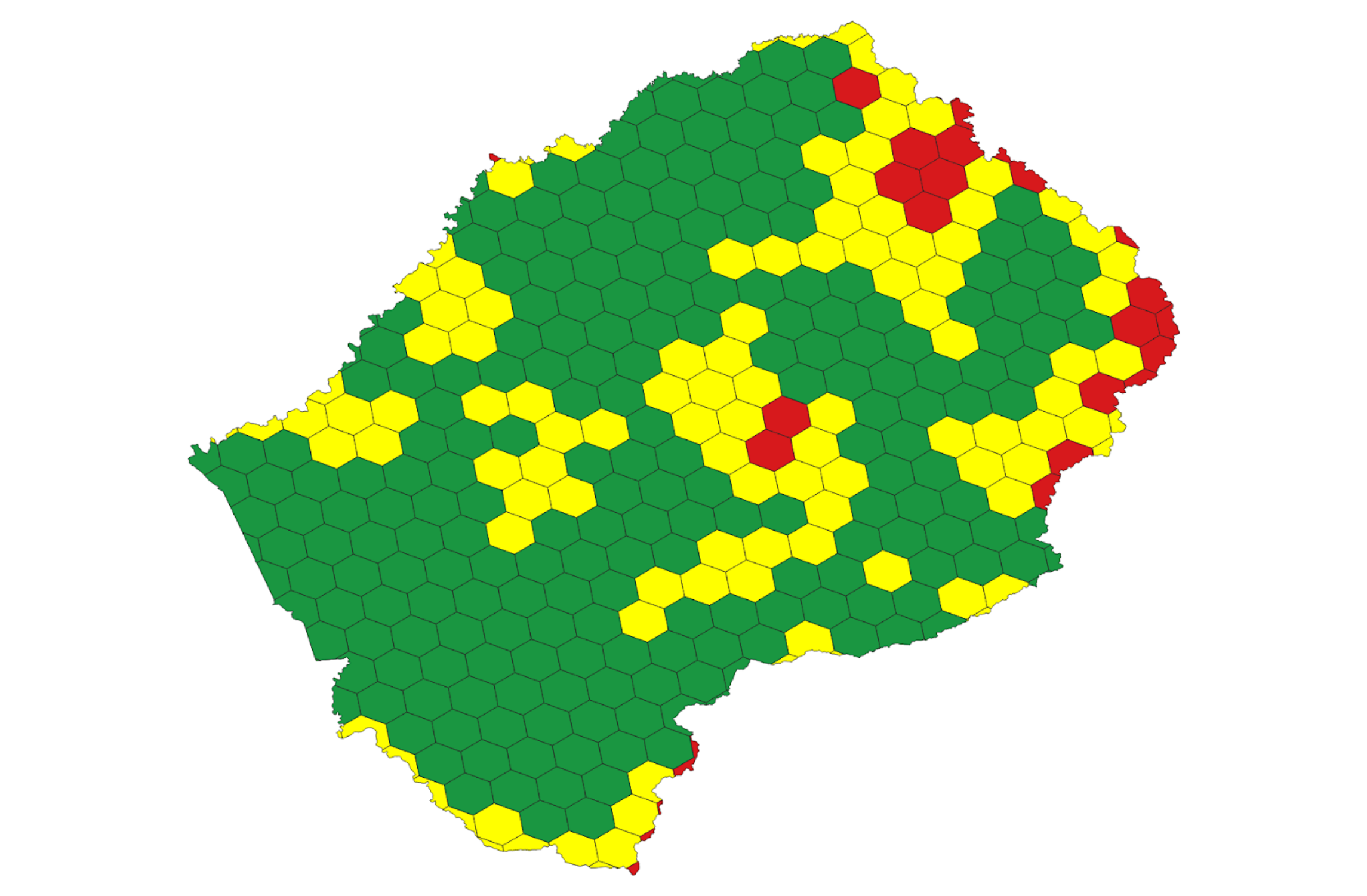 A visual such as presented in the figure above is not produced in standard API requests.

In the figure above it is possible to observe that although there are a number of hex-cells which show a low completeness ratio, they only represent a small area of the total building area and thus play less role in the weighted average than the hex cells which present a completeness ration between 80 – 90 %, as they amount to a larger percentage of the total building area.

For our hypothetical case example, the results imply that overall a high degree of building completeness can be determined for Lesotho, as the report states, a weighted average of 88%. It seems that hex-cells that have a higher degree of urbanity and thus a higher share of the total building area are relatively well mapped in OSM compared to a number of hex-cells which occupy a lower share of building area. This could imply, for the research team, that the quality of OSM data in some rural areas is lacking. When combined with other OQT tools and other services based on the ohsome framework such as ohsomeHeX, the research team could get further insights on the quality of OSM data in the region, which could provide useful insights into how to develop a methodology or interpret their conclusions.

In addition to those new features to OQT various smaller changes have been made, all to be found in the changelog. A recent addition, from release 0.10.1, allows the user to request a “Multilevel Mapping Saturation” report which indicates the mapping saturation of four Map Features simultaneously. If you have any ideas, feedback or would like to contribute to OQT feel free to contact our team via ohsome@heigit.org. OQT is Open Source and the development is done on GitHub, where contributions are welcome.

The further development of OQT of course does not end here. We have a couple of interesting new additions in the pipeline, including, as mentioned earlier, an expansion in the use cases for the Building Completeness Indicator, where multiple data sets will be utilised to allow worldwide access.

OQT relies on OSM data processed by the ohsome framework developed at HeiGIT. The aim of the ohsome framework is to make OSM’s full-history data more easily accessible for various kinds of data analytics tasks, such as data quality analysis, on a regional, country-wide, or global scale. Here you find a list of related blog posts and publications: